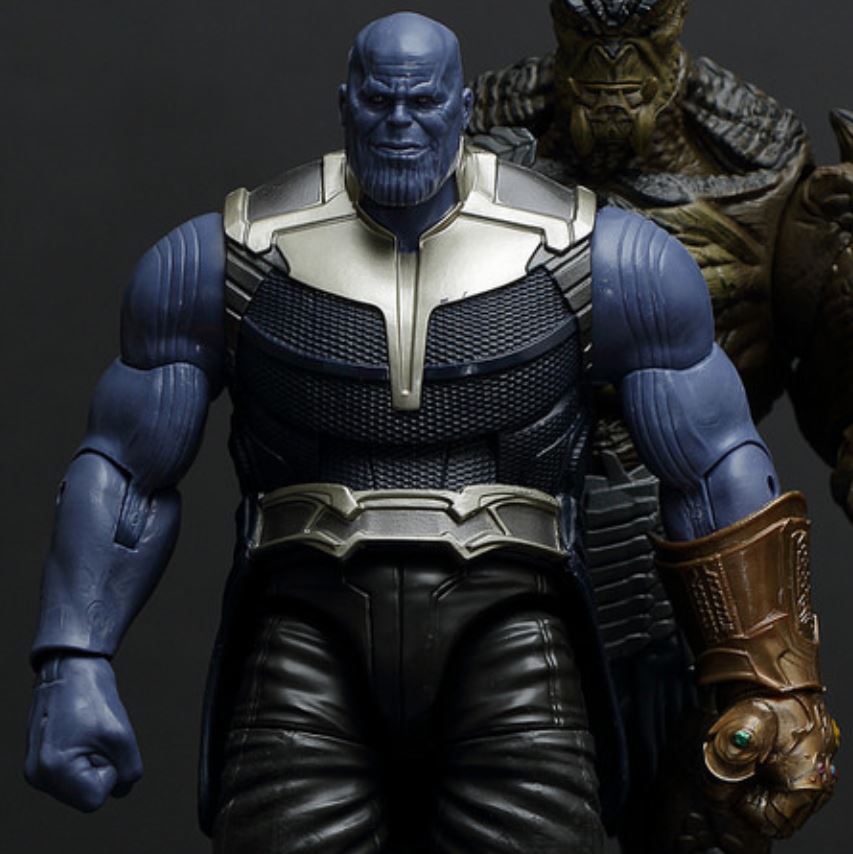 Big business creates big and perplexing challenges. The kind of challenges that aren’t solved by talking shop or think tanks or brainstorms. Challenges that demand actions and solutions that only the strength and determination of true leaders can deliver.

Business doesn’t come much bigger than maintaining order and balance in an entire universe. The challenges it brings are not to be sniffed at, either. Things like overpopulation, for example, tend to focus the mind.

And as the self-appointed and not-terribly-popular CEO of his universe, Thanos wrestles with big picture stuff like overpopulation from the moment he gets up in the morning to the moment he unfolds himself into a lawn chair, rattles the ice in his gin and looks out over the twilit dusty orange plains of his home planet.

Luckily, Thanos considers himself the greatest of all leaders and he has a plan to meet the challenge of universal overpopulation. Luckily, that is, for half the population. The other half won’t live to reap the benefits, because they are his solution.

With warped logic that’s hard to argue but monstrous to entertain, Thanos has decided that all he really needs to do is randomly wipe out half of all life and start a new chapter with different rules to create a different ending.

We’ve all worked for a Thanos or know someone who has. Not a Thanos who commits genocide on a literally universal scale, obviously. But a Thanos who genuinely wants the best for his or her organisation, but whose plan to achieve that is divisive and damaging? Sure, we know that guy. Or know of him.

These are people who absolutely demonstrate many of the key qualities that make for effective leadership. And we also see these familiar qualities in the Thanos who wreaks carnage throughout Infinity War.

Being able to get people behind them? Thanos does this.

Having a compelling mission? Thanos has this.

Having strength in their convictions? Nothing missing here. Thanos doesn’t let anything get in his way.

Finding a solution to a big problem? Absolutely, though – crucially – one that splits opinion faster than you can say Brexit.

The willingness to make personal sacrifice? Thanos sacrifices his own daughter for the greater good, so I think we can consider that box ticked.

In the world of this kind of leader, unpopular decisions are not considered misguided – they’re simply the decisions that others are too weak to make.

But that creates all sorts of issues. Stoic resolution blurs easily into irredeemable blindness. Unswerving commitment becomes pig-headedness. Good metastasises into not-so-good and, from there, into downright bad.

In trying to create a better world, the Thanos we work for instead risks creating one that is divided and mutinous and far, far worse than we could ever have imagined it might be.

So, what do these types of leaders look like in the corporate world?

Often, they are the enigmatic ones who convince their staff to give up all their time, or perhaps persuade us (their customers) to give up our data. We’re won over to their cause or product, either because they are powerfully articulate, or because we don’t have a choice.

They use coercive power in different ways to get what they want, and we simply bend to their will, however unwillingly.

This can work in the short-term. It often does. But what does it mean for the long-term? For their legacy?

The leaders we remember are not those who muddled their way through. We remember those who elevated us and those who crushed us.

Their leadership legacy is impacted by:

o   How engaged their people are

o   How well they deal with change and uncertainty

Thanos approached those “trivialities” in a way that doesn’t usually lead to long-term success. But then he’s not exactly a role model if you’re trying to create a cohesive environment and culture.

We’ve yet to find out what the future looks like in Marvel’s post-Thanos universe, but current thinking suggests its landscape may not be so very different from the organisational environment left in the wake of his corporate alter ego; some people may simply not be there anymore; the new reality is undeniably changed.

Critically, most business leaders who behave like Thanos wouldn’t recognise the fact and it takes self-awareness and a commitment to personal review to take tough decisions whilst remaining the leader you really want to be.But what would happen if you were to lead like him? Is the potential result the commercial epitaph you’re chasing, or do you dream of being something – and someone – different?